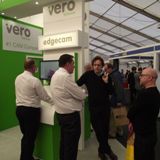 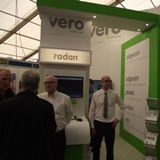 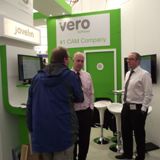 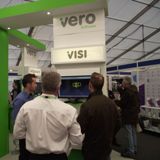 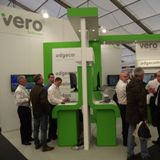 Each of the four Vero brands exhibiting at the Southern Manufacturing show reported exciting prospects as a result of their presence there.

EDGECAM finalised a sale on the booth, and reported strong leads across the three cutting disciplines of milling, turning and wire EDM.

There is a high probability of a former JAVELIN customer returning to the software after seeing “tremendous advances” in recent releases.

And visitors to the booth were particularly impressed with VISI’s surface and solid modelling tools.

EDGECAM Area Sales Manager Scott Ravenscroft says he was approached on the booth by an existing customer wanting a new post processor, and the deal was agreed during the three-day exhibition.

“EDGECAM is a multi-discipline system for milling, turning and Wire EDM, and we’ve taken leads from manufacturers using all three of those cutting technologies.

“Many visitors were impressed with the game-changing Waveform roughing strategy that is now available for both milling and turning, and we also demonstrated the new Ramp Cut strategy in the Rough Turn Cycle. This method is typically used for turning deep recesses with double-sided turning inserts...and extends tool life as the contact point on the insert is constantly changing, avoiding notching. The new strategy can be used with decreasing cut increments.”

Andy Mills, Account Manager for Vero’s ERP/MRP system, JAVELIN, says as well as a number of potential new business enquiries, a former customer who had moved over to another production control software, said he had ‘made a mistake.’

“We demonstrated the latest version, 2016 R1, and showed the number of developments in recent releases, which prompted the former customer to say he could well contact us shortly to see about returning.

“Overall, visitors were particularly impressed with JAVELIN’s quality aspects – recording quality on parts, and the quality in respect of recording size on operations, and the control of part issue and part review.”

For RADAN, the highlight of Southern was the interest shown in their bending software, Radbend. Area Sales Manager Gary Smith says: “Manufacturers are starting to see their experienced press brake operators retiring, and they find it difficult to recruit skilled replacements.

“So they’re using Radbend to bring the knowledge that they’re losing at the machine on the shop floor, into the engineering department. Using Radbend means they can recruit semi-skilled workers on the press brakes, who are being supplied with full bending programs from the office.”

He says the quality of leads generated at the exhibition is higher than in previous years. “We had a number of enquiries from a range of manufacturers – although predominantly sub-contractors – who are genuinely looking for new software at this moment.”

VISI’s Southern Sales Manager Rob Hawkins also reported a number of strong leads over all three days of the exhibition. “We were showing our latest release, VISI 2016 R1, and visitors were most interested in its modelling and machining features because of their ease of use, along with the press tool design and mould tool design capabilities.”

It was the first time VISI had had a presence on the Vero booth at the exhibition, but he says they will definitely be back next year. “It’s been particularly successful for us...well worthwhile attending.”