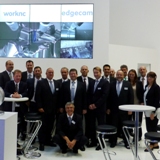 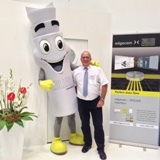 A globe on display at Vero’s EMO booth symbolises how its software brands are international market leaders. And videos playing on the combined EDGECAM/WORKNC booth showed the turning and 5-axis milling process that went into manufacturing the globe, on a DMG DMU60 Evo machine.
Work on the globe was funded and overseen by EDGECAM’s Master Reseller Camtech, who devoted time, energy and money, on creating it as a focal point on the EDGECAM booth.
Visitors to the EMO exhibition in Germany also saw Camtech’s slogan “Workflow – the fastest way to create a program since NC code began,” lives up to its reputation.
EDGECAM 2013 R2 was released for German manufacturers at EMO, and Camtech’s Ulrich Rienks says everyone was excited about the new Workflow user interface, which enables engineers to apply toolpaths within seconds.  “It aids in loading and positioning the component, choosing the manufacturing method and suitable machine tools, adding user defined stock or stock from a database, importing fixtures, selecting a machine and toolkit, and managing strategies to automate manufacture.”
Visitors to the EDGECAM/WORKNC stand were also interested in tool and data management systems. EDGECAM highlighted its interface with Zoller, optimising and organising complex manufacturing processes through a transparent data transfer between tool management and CAM system.
The EDGECAM/WORKNC stand featured a video wall with large screens demonstrating both software brands cutting complex parts, including the symbolic globe.
WORKNC’s latest release, V22, was on show, featuring new morphing and spiral transition options, along with improved toolpath point distribution management, which all contribute to ensure optimal surface finish quality as well as reduced cycle times. And visitors also saw the versatile 3D viewer, WorkXPlore 3D, which contains many features usually only found in CAD systems, enabling users to perform diagnostics, create assembly instructions and prepare the production of 3D models. With over 100 strong contacts and sales leads made at EMO, WORKNC say it is important show to exhibit there, as many of their customers attend to get information about new machines.