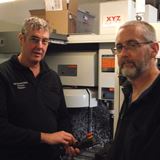 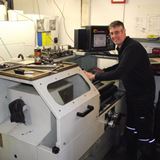 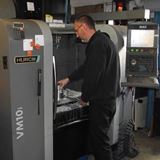 A long-established family-run injection mould maker and engineering company thrives on helping customers out in emergencies.

DJM Engineering (Banbury) Ltd uses EDGECAM for quick, emergency 2D design and machining to repair customers’ damaged or broken parts and get them back in action within hours.

“We’re using it with the latest WNT cutting tools, and as we’re programming it with EDGECAM we’re definitely not holding back on speeds and feeds across a range of materials.”

“I’ve often been in the workshop at two o’clock in the morning repairing parts for automotive, medical and aerospace companies, whose production lines have ground to a halt because a component has broken or failed,” says owner Colin Merry.

“A number of our customers operate production line machines, and need them to be running constantly – there’s a lot of pressure on automotive companies, in particular, to deliver, because many products are manufactured on a ‘just in time, built to order’ basis.”

The company is regularly called upon to repair components for a wide variety of machines, including punches, presses, die stampers, rollers, and even ovens. “In fact, anything that has mechanical movement where a part can break down and cause a production catastrophe.”

He says their emergency service is a mix of repairing the actual damaged component, and remaking it from scratch. “We need to give those jobs top priority so our customers can get their production lines up and running again.”

The first part of the process is to find out from the customer why the component failed or was broken, what it does, and which aspects of it are critical. “For instance, if it’s something like a shaft, we need to know if it was worn…because if we make it to the identical measurements of the one we’ve been given, it won’t be right, so we need to overlay the original dimensions onto the worn part.

“And if a part is broken we need to know why, so we can engineer a solution.”

Once they have built up a complete picture of what they need to make, and are happy with the measurements, they begin the design and manufacturing process using EDGECAM’s 2D functionality. “We don’t need 3D models for this type of work…I only have to draw it in 2D which means we can get it on to the CNC machine tool extremely quickly.”

If the part is to be machined on either of their Hurco VM 10 or XYZ 500 LR mills he creates roughing and profiling cycles initially, and while they are running he’ll work on the remaining programs. “This is especially valuable in the middle of the night,” he says.

Their XYZ 500 LR mill was the first of its kind in the UK when they installed it, and is the first XYZ machining centre to feature linear rail guide technology. “We’re using it with the latest WNT cutting tools, and as we’re programming it with EDGECAM we’re definitely not holding back on speeds and feeds across a range of materials.”

And if it’s a turning part, it goes through a DXF converter and is being machined on their XYZ 1630 lathe in a matter of minutes.

As well as using EDGECAM on the emergency repair side of the business, it is also vital for their general engineering and manufacturing – again, focusing on automotive, medical and aerospace. EDGECAM drives both milling and turning, and he says they use it on all components. “Because our parts are high precision we need to ensure that we get everything right first time, every time. Without EDGECAM we’d struggle to be what are and do what we do.”

Colin Merry works with his brother Ian and father David. The three-man company developed in 2001 from an original tool making business founded by David in 1990, where Colin undertook what he calls a ‘non-standard apprenticeship,’ involving learning a variety of traditional engineering and mould making skills from time-honoured craftsmen.

“I learned everything from those highly-skilled toolmakers. I’d often see two or three ways of doing something, and I’d pick the one that seemed to be the most effective.”

So, the logical third prong of their business is tool making, and Colin Merry designs all their moulds with EDGECAM. “Many customers may only have an idea of the end product, or just a paper drawing…so we draw something up for them and add the shrinkages in EDGECAM, building the tool around it. We have standard catalogues so it’s easy to download the tool base, and I always try to start machining the cavities and cores as soon as possible.”

As a skilled toolmaker with many years’ experience, he is able to accurately create and place all ejector pins and gates with EDGECAM. Even complex moulds present no problem to designing in EDGECAM. He cites an example of an agricultural earth-moving part requiring pins on a number of flat surfaces, an ejector stem covering the internal face opposite the nozzles on the moving half. “Being able to do all this with EDGECAM, instead of specialist mould and die CAD/CAM software all comes through my training and experience, having built more than 600 mould tools during my career.”

And he says the filling is taken care of by pulling the CAD in from the nozzle supplier and inserting it straight into his part file.

Nowadays they make around four or five specialist mould tools in an average year, each one taking between and four weeks, for customers requiring small production runs of just a few thousand, and, in some cases, even one-offs. “It’s a different style of tooling, with a lot of wire erosion sections. The days have gone when we used to spend two or three months building large, complex, tools with multiple cavities in hardened steel to run millions of plastic injection parts.”

Concluding, he says: “We may be a bit old fashioned in our approach, in that we’re all about simply trying to help people, but it does mean that customers keep coming back to us.”

"A number of our customers operate production line machines, and need them to be running constantly – there’s a lot of pressure on automotive companies, in particular, to deliver, because many products are manufactured on a ‘just in time, built to order’ basis."